In 1886 a joint stock company was formed in Almonte to introduce electric lighting to the Town. There were 20 privately owned streetlights in the initial grid. The people of the Town were very impressed by these lights, and in 1888, they prepared a petition to have the streets of Almonte lit. The motion to light the streets was defeated by council that year. In 1889, after pressure from the Townspeople, the motion passed. At Last the Town was partially lit with public electric street lighting in September of 1889.

In 1890 Dr. A.A. Metcalfe and his brothers, James and Robert, built the first hydroelectric generating plant in Almonte. For the next ten years they operated as the Almonte Electric Light Company and sold the power that they generated.

In August of 1899 an Electric Light Committee was formed to determine whether or not Municipally owned electric lighting was a good idea. After much debate on whether to build a new plant or to purchase the plant owned by the Metcalfe brothers, the Town decided to buy out the Almonte Electric Light Company and it’s plant on October 30, 1901.

The Commission is established

In 1908 the Almonte Electric Light Commission was formed. This elected Commission owned and operated the generating plant, distribution lines, and customer accounts, but still had to consult the Town for all financial decisions. The first Commission meeting took place in Council Chambers on January 15, 1908. It was moved at this meeting that the Chairman interview the Sterling Bank in hopes of arranging a deal to have them collect all Electric Light accounts. (The Sterling Bank was situated at 28 Mill St., and is now the Almonte Hydro office)

In 1915, as the demand for electricity grew, the plant overloaded. At this point meters were installed and the load was effectively cut in half.

By 1919 the plant was again running close to its capacity of 13 kilowatts.

In 1919, the Wylie Mill and power plant came up for sale. There was a great push by ‘Doc’ Metcalfe and several mill owners for the Town to purchase the plant. They argued that without an adequate supply of power no new industry would locate in Almonte and existing businesses may be forced to relocate where there was a more reliable power supply. Mayor Thoburn and other mill owners who supplied their own power countered with the argument that there was more than enough power, just not enough labour. They suggested that a sewer and waterworks system was a higher priority than additional power. Despite Metcalfe’s push to buy, the Wylie power plant was not purchased until 1920, when the landowners in Almonte voted to raise the necessary funds to make the purchase.

The parts necessary to make the Wylie plant compatible with the rest of the system in Almonte were not purchased until mid 1921. The Wylie plant was finally activated by the Town in March of 1922.

In late 1922, the Commission saw serious safety problems with the Town plant and came to council with a report listing three options. Of the three options, the report stated, the Council had to choose one, in order to avoid further deterioration of the plant and maintain power supply to the Town. The options were 1) proceed with major renovations on the existing plant, 2) construct a new plant below the stone bridge, or 3) build a plant that would take advantage of the entire 63 foot drop of the falls.

The report was ignored and so was a Factory Inspector’s report the following year.

In late 1923 the plant shut down due to a broken shaft. The shaft was repaired but the plant still needed a significant amount of work.

In the 1924 election Metcalfe ran against Thoburn for mayor. Although Metcalfe won the election, the plant that he proposed to build was still not constructed due to the fact that many of his opponents were elected to Council that same year.

A year later, in 1925 Mayor Scott was elected. With Mayor Scott’s drive and James Rosamond’s influence, the proposal for the new plant, just below the one that already existed, finally passed.

A new plant is born

Construction of the new plant began in June of 1925. On January 26, 1926 the new plant came on line. The plant was built to house two generators, but only one was initially installed. This first generator was expected to produce 500 kilowatts of power, but only generated about 340 once installed. In 1934, the 2nd generator with an output of 550 kilowatts, was added which brought generation up to 840 kilowatts.

In 1940 the present office building, located at 28 Mill St. was purchased by Almonte Hydro and has been used for Commission meetings and as the hydro office ever since. Before this building was purchased, the Commission met in the Council Chambers, the generating station, and finally a brick house that stood where the Ultramar is presently located.

From 1934 to 1944, the power situation in Almonte got progressively worse due to an increase in demand and no increase in generation. Then, on April 21, 1944, the Town held a vote. The residents of Almonte were asked to decide if they wanted Almonte Hydro to sign a contract with Ontario Hydro. If they voted Yes, Ontario Hydro would provide the town with any power that they required over and above what could be generated at Almonte Hydro’s generating station. There was a great war of words from the political sides for and against the idea. Metcalfe claimed that Ontario Hydro was holding back water so that the plant couldn’t generate enough electricity for the Town. At that time, Ontario Hydro actually owned the majority of the shares in the Mississippi River Improvement Company, which controlled the dams along the river. The Almonte Gazette published many letters written by politicians who told the citizens of Almonte that this vote was of extreme importance for the future development of the Town, and that they must vote Yes.

The people of Almonte voted Yes, and on January 19, 1945, the transformer that brought Ontario Hydro’s transmission voltage down to the level used by Almonte Hydro, was switched on.

In 1960 and 1961 the plant underwent some major changes. It was automated so it could operate unattended.

In 1962 and again in 1965 the substations MS Number 2 and 3 were built on Victoria and King Streets respectively.

From 1945 to 1987 the percentage of power used by the residents of Almonte that was generated in Almonte, decreased gradually. In 1987 Almonte Hydro’s plant was generating a mere 12% of the Town’s power requirements, while the remainder was purchased from Ontario Hydro.

In 1979, General Manager, Brian Gallagher, realizing the need to upgrade the generating station, set the wheels in motion by hiring an outside firm to conduct a feasibility study.

In 1986 a lightning strike damaged one of the generators.

Powering up the plant

In May of 1989 the main contractor on the generating station project went bankrupt. This seemed to set off a string of poor luck, as the next contractor to be hired, also filed for bankruptcy, as did the parts supplier. Over the next year and a half, Almonte Hydro’s linemen put in many long days and worked tirelessly, while others were looking all over North America for the proper parts to complete the project. 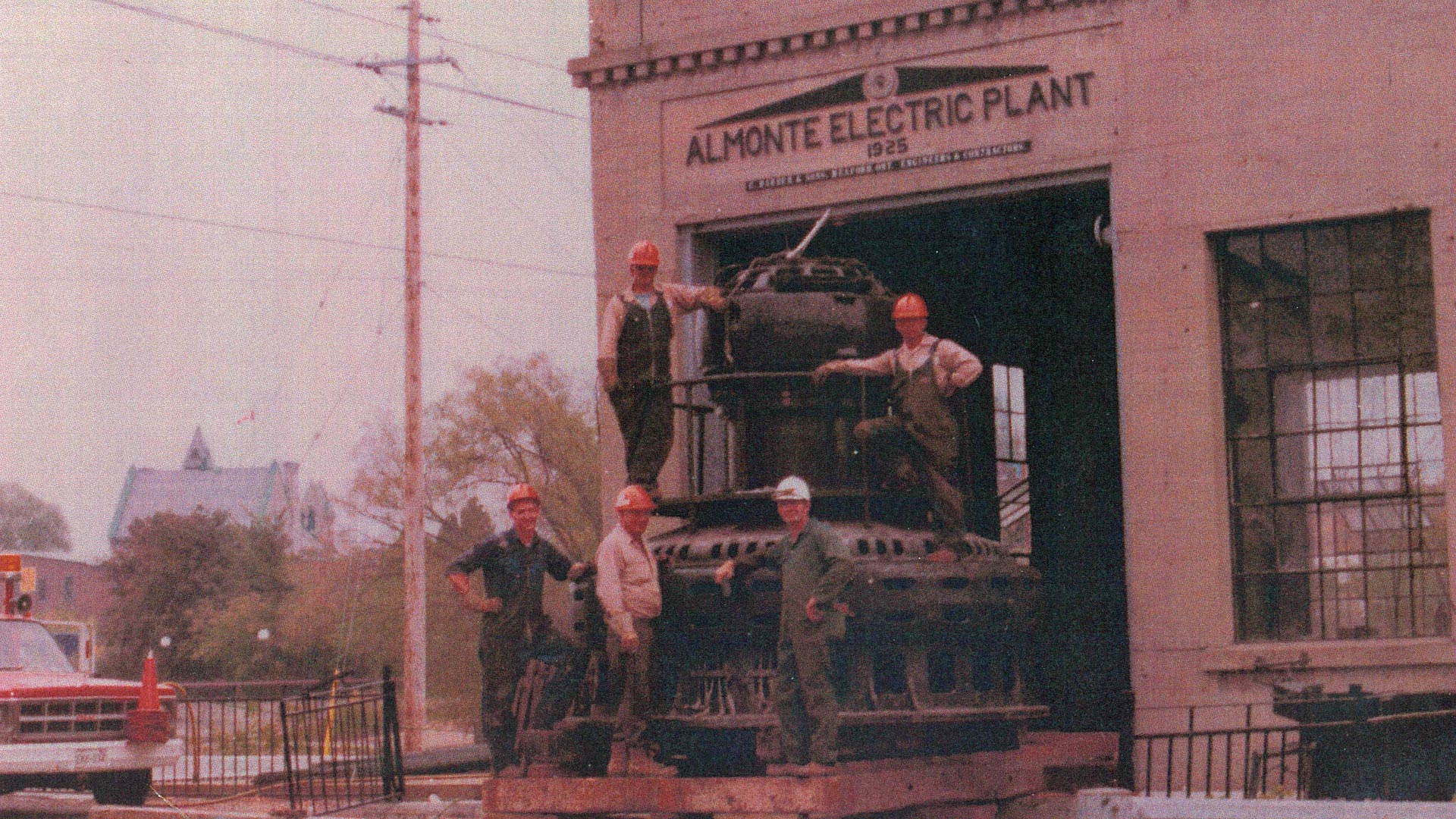 The rehabilitation project at Almonte Hydro’s Generating Station in 1987, effectively increased the generation by 350%, bringing the percentage of power used by residents of Almonte that is actually produced in town, from 12% to nearly 45%.

The Mississippi River Improvement Company was dissolved on September 30, 1991. At that point Ontario Hydro owned approximately 88% of the shares, while the Corporation of the Town of Almonte owned about 10%.

By 1996 it was becoming increasingly evident that the Ontario Government was going to introduce legislation to deregulate the electricity industry in the province. In recognizing this, the possibility of creating a Lanark County Utility was discussed and investigated.

In 1997, Almonte, Pakenham, and Ramsay amalgamated to form Mississippi Mills. This change caused Almonte Hydro to become officially known as Mississippi Mills Public Utilities Commission. Although Almonte Hydro’s name changed with the amalgamation, the service area was still restricted to the ward of Almonte.

On October 30, 1998 the Ontario Government passed Bill 35 (The Energy Competition Act). As a result of Bill 35, Mississippi Mills P.U.C. must split into two separate entities, one for generation and the other for distribution. Each entity incorporated under Ontario’s Business Corporations Act.

The Generation side of the former Almonte Hydro incorporated on October 1, 2000 as Mississippi River Power Corp.